I have read that the Callier Effect will cause a condensor enlarger to produce a ‘contrastier’ print from a given negative than a diffusion enlarger would produce. Explanations of this effect have left me confused. I have listed a “typical” (actually one of the better) explanation of the Callier effect, and follow with a few questions.

Geeky details
This quotation is from http://darkroomsource.com/enlargers.htm#callier : “A condensor enlarger collimates light, which makes the light rays parallel. When these parallel light beams hit the negative, the light beams get scattered as they hit the emulsion. On low density areas (dark areas), the light passes through relatively unscattered. But in the high density areas (highlights), the light rays will scatter more. Where they scatter less, they are more intense on the paper, and where they scatter more they will be less intense on the paper. The more light passing through the negative onto the paper the darker the image on the paper. What this means is that those areas which are to be dark, will be emphasized as dark, and those areas that are to be light will be emphasized as light, in other words it tends to increase the contrast range of the negative.”

1) Where is this scattered light going? Is it being reflected from the negative back into the lamphead (above the negative) or somewhere else?

3)Can anyone refer me to a diagram that graphically explains what is going on here?

4)Here is an experiment I conducted. I took two negatives — one was “clear = Base + fog”, the other with with uniform density (i.e., picture of a gray card). I then made two sets of measurements with an incident light meter. The first measurements were made by having the light meter (without dome) meter a light source through the 2 negatives, placed directly on the sensor. I measured 3.5 EVs of difference. The second measurements were made by placing the light meter on the easil below my condensor enlarger, face up, & measure light projected through the 2 negatives (in the carrier.) Here also I measured 3.5 EVs of difference. WHY WOULD THESE MEASUREMENTS BE THE SAME? SHOULDN’T THE CALLIER EFFECT CAUSE THEM TO BE DIFFERENT? 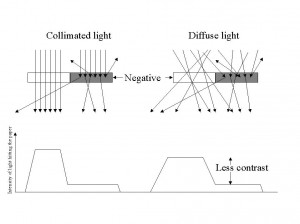